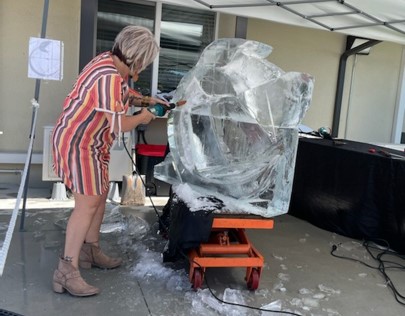 Prior to acquisition in May 2017, Meadowview (formerly Midland Care Center) was struggling. The reputation in the community was poor, culture in the facility was lacking, and Therapy was contract and had a strong “us versus them” mentality. Since then, Meadowview has undergone a complete transformation. The building has been remodeled, and an 18-bed skilled unit was added with a new and improved therapy gym. Therapy moved in-house, the culture throughout the building is one of the best throughout the organization, and Meadowview is now a facility of choice in the community.

In addition, Meadowview has become a leadership development powerhouse. Two of the nurses have gone on to become DONs in cluster facilities, and another nurse has become the ED at a cluster facility!
At the recent Flag ceremony, it was a true celebration. The ED, Melissa Truesdell, thanked the staff for all of their hard work and dedication. The DON, Jeremy Withers, gave a heartfelt speech where he kept coming back to how incredible the staff has been at “loving on the residents” and how that has been the driving factor in Meadowview’s transformation and success. And Tess Hurley, Physical Therapist, asked for a minute with the mic so she could heap praise on their DOR, Kristen Bailey. She thanked Kristen for supporting the therapists in being creative with treatments and growth ideas as well as positively challenging them to always be the best versions of themselves.

It was a touching celebration and even included the ED Melissa trying her hand at ice-sculpting under the tutelage of another ED in the market that is an accomplished ice-sculptor! Congratulations, Meadowview!