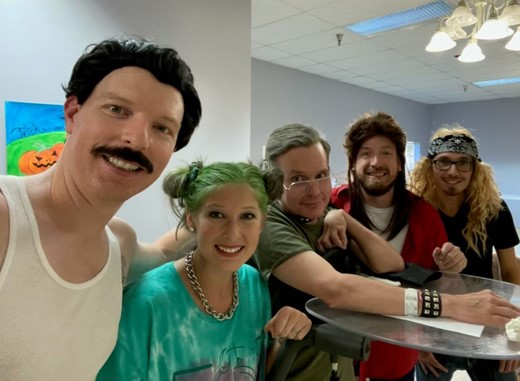 Submitted by Kelly Schwarz, Therapy Resource, Bandera, AZ
Johnathan Kingsley, DPT at Horizon Post Acute and Rehab in Glendale, Arizona, has enjoyed sharing his musical talents of song writing, guitar and singing with residents at work and has been able to touch the residents’ lives in many ways with his creativity. Recently, the team found it challenging to motivate a particular resident (Alex). Johnathan was inspired to not give up on Alex and really wanted to give him a reason to live.

Johnathan came up with the idea of helping Alex find a reason to give back to the facility and the other residents to help motivate him. After spending time together, it was discovered Alex really wanted to learn to play guitar; however, due to loss of function of his left-hand s/p CVA, this was not a feasible goal. Johnathan started having Alex sing along with him as he played guitar, and Alex started writing lyrics to songs. Whenever Johnathan practices singing/lyrics with him, Alex is in the standing frame, which is a difficult task for him. However, he often comes to the gym on his own now, asking to work on standing and singing.

Alex spent time on songwriting and made new lyrics to the song “Islands in the Stream.” The plan was to play/sing the song to the facility after much rehearsal. With Halloween approaching, Johnathan had the idea of taking the plan one step further. The therapy band, which consists of Johnathan (vocals and guitar); Kayleen Bennett, OT (vocals); Zakk Montgomery, PTA (drums); and Alex (vocals), dressed up as famous musicians. They made sure Alex was dressed for the occasion as well, and the whole facility was entertained!