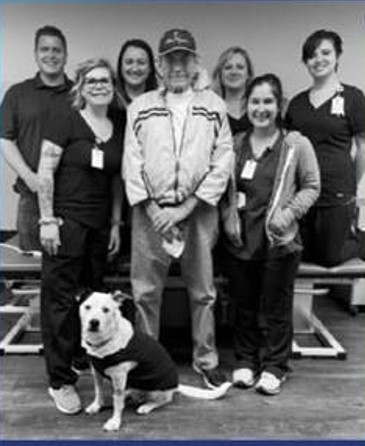 By Jada Exstrom, PT, DOR, Shea Post Acute Care, Scottsdale, AZ
Meet Charles—Charles came to Shea Post Acute Rehab Center after suffering several falls in which he hit his head and suffered multiple fractures, contusions and hematomas. As a result of the multiple falls, he was met with confusion and memory deficits, and he had severe restrictions and limitations both mentally and physically, which impacted his progression in rehab.

Due to his medical complexities, confusion and high risk for falls, he ultimately required one-on-one care and attention, including frequent redirection and reorientation. Due to his deficits and decreased safety and insight, case management worked diligently on alternative discharge planning, including discharge to a group home, ALF, or LTC, for a higher level of care. But, much to our dismay, Charles had other plans. He was adamant about returning home and being reunited with his cats.

With the diligent management of his care, watchful eye of our staff and increased oversight, he was able to persevere. There were some things that many were unsure we would ever see from Charles. Charles started to increase his participation in therapy and even started to direct his care, drive his own rehab, and with Zane’s help (our therapy dog), Charles thrived. Charles became a fixture at Shea, walking through the halls (11 laps at a time), visiting Zane every day, conversing with other residents and brightening everyone’s day with his positive outlook.

Charles was able to walk out of Shea on his own accord, no need for any assistance, and return home to be with his cats. Charles is also planning to return to work. Charles, while you gave us a run for our money, you are a great success!

All Aboard Full-time Occupational and Registered Physical Therapists! Free cruise for 2 to majestic Alaska or tropical Baja Mexico. Check out these therapy team opportunities at Broadway Villa and Valley of the Moon.

All That Jazz Brings Back Memories and Camaraderie

By Maryanne Bowles, Endura Therapy Resource, ColoradoBack in January 2021, I presented on the resource call about thinking outside of the box on what therapy could do to help Clinical and opportunities we could take. I presented on an MDS coordinator position being held by a therapist. The position works closely with the nursing team...