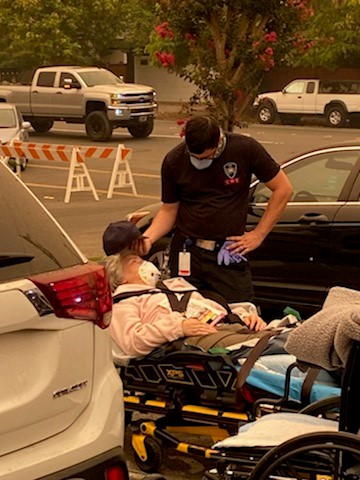 By JB Chua, DOR, Summerfield Healthcare, Santa Rosa, CA
October 9, 2017, and September 28, 2020 two dates that are significant to Summerfield Healthcare Center. These are the days that we, the Summerfield family, had to evacuate our patients out of our facility and send them temporarily to another place that is not their home. Their limited choices were either in a relative’s home, another skilled nursing facility and worst, evacuation centers. These were definitely one of the most stressful events that Summerfield had experienced. Staff worried about their homes, patients worried about their safety and patients’ families worried about their loved ones. The sky seemed to empathize with the situation with its gloomy hue and the air felt like a snake coiling around your body making it so hard to breath and the smoky air threatens to cut off your oxygen. Definitely not something anyone wants to experience during their lifetime.

As we received the orders to evacuate, text messages and phone calls started to flood my phone. Messages that even I, who holds my team to a very high standard, was surprised to receive… “I’m on my way and Schuyler (my OT’s boyfriend) also wants to know if he can help.”… “Michael (my PT’s fiancée) and I will be there in a little bit.” and many more similar messages, there were some of my staff who were evacuated, on vacation and have younger children who came in to help. Literally, all hands on deck. As the evacuation progressed, each and every patient was assisted in getting dressed and back up on their wheelchairs, we served them breakfast and helped some residents eat, some helped them back to their room to use the bathroom, the therapy room was converted into a calming room where we played soothing music on our phones (power was down so we were not able to use our therapy music player) and some staff were trying to re-assure our residents that everything is going to be fine, even though there were some doubts if it really was going to be. When the transport arrived, we started to roll our patients out towards a safer place. Even with worried hearts and uncertainty, the staff continued to re-assure our patients, waved them good bye and told them that they were going to see them again when everything was all over.

October 19, 2017 and October 4, 2020 two more dates that will be remembered as well, not because of any tragic event, but because of what these dates unconsciously signify to each and every individual at Summerfield Healthcare Center. It signified opportunity, growth and most importantly hope. Opportunity for each one of us to hit the reset button and start anew. The building was deep cleaned by the staff members, from therapists, nursing, administration, you name it, and you got it. Each and every single one looked for opportunity rather than focusing on the misfortunes and tragic events. Growth was experienced from overcoming challenges such as having to go to another facility to help out with our residents, finding new ways so that we can still provide for our residents and staff even when our resources were not as readily available during normal times and finding a new homes for those who had lost theirs. Lastly, hope; hope that everything we had gone through this year was fully addressed so that we will be better prepared both physically and mentally should these type of events happen again.

As I write this article, there are multiple times that I have had to hold back my tears, not because of sadness but because of how I was humbled with what I had seen and lived through. It reminded me of a saying about how a person’s character will really show up during tough times. On behalf of the therapy team I observed my therapists showing great devotion to our patients and to our facility. They were there from evacuation, helping other facilities, cleaning up the facility and welcoming our patients back. During these difficult times I was mostly impressed with the support they gave each other. I have read a lot of success and inspiring stories that gave me chills as I read them. Having to experience one, is quite overwhelming and humbling. Every now and then, even before this experience, I would send a message to my therapists that I am proud to be a part of our team. As I sent another message to them, after we received the announcement that we can get our patients back in our facility, those same words felt insufficient to really express how I felt. I know deep in my heart, that if the same thing happens in the future, Summerfield Healthcare Center will rise to the occasion once again, because that’s who we are.